In my last Disneyland blog post I talked about where we stayed and where we ate. This time, I wanted to touch on one of my favorite things about planning a Disney trip…what to wear! I absolutely love coordinating with my little princess and it’s even more fun when Daddy can join in. I think the outfit planning adds to the anticipation of the trip and for me anticipating and organizing a vacation is honestly half the fun!

We were at Disneyland at the end of September and it was still very hot in California so cool and comfortable were high up there in importance when it came to outfits. One of the number one things I always do at Disney for my little princess, is plan 2 outfits per day. She loves to wear her elaborate princess dresses to meet the princesses but those dresses are way too hot and uncomfortable for a full day at the park. So I like to put her in a princess dress in the morning then change her into something comfy after her afternoon nap. This year I brought along comfortable outfits that were similar to her princess dresses. Really, they only need to be the same color to convince a 2/3 year old that they are still princess dresses! My favorite places to get solid colored dresses are June and January, Hanna Andersson, and Old Navy. For Mama and Daddy, I try to coordinate as closely as possible to the princess Saige is dressed up as for the day!

Saige wore a gorgeous Aurora dress from the Disney store on the first day. It has all these gold details that are stunning. The bottom of the dress has Aurora, forest animals, a spinning wheel and fairies worked into it. So pretty! I paired it with the cutest little pink and gold crown headband (link is to a similar headband) from the Cat and Jack line at Target. I tend to go with headbands for Saige because she is more likely to keep them on than the plastic tiaras. She also wore Mini Melissa shoes in the Mickey and Minnie style. These are an older style than the ones currently being carried at places like Nordstrom, but I got them on Gilt for a way better price so yay! For after nap, I changed her into a pink tutu type skirt from Hannah Andersson, and the cutest Minnie/Aurora embroidered top that my mom had bought for her. She kept the shoes and headband on.

I wore a bright pink Essie dress from Lilly Pulitzer to match Saige, sparkly white kate spade Keds and the most gorgeous pair of custom flower ears made by Holley at Clutch Your Pearls! The Lilly dress is not in stock anymore, but I was able to track it down on Zappos and Amazon. Also, I will say, Essie dresses are always a win at Disney. The perfect cute/cool/comfy combo. Same goes for the Keds!

Daddy tied it all together with pink Jcrew pants and a “prince” tee from the Etsy shop California Teez. They can customize the shirt to any color as well!

Cinderella costumes were made for Saige. I might be biased but she just looks so beautiful in the blue! Again, the Cinderella costume was from the Disney store because their princess dresses are so awesome as far as quality and details go. Also, she has a Fairy Godmother (auntie) who spoils her with all sorts of princess things! We paired it with a blue bow headband from Janie and Jack and the cuuuuutest mouse shoes from Target! Naturally she named one Gus and the other Jack! This day was particularly hot and she was so happy to change into what she had officially dubbed her “comfy Cinderella dress”. This one is a favorite and she wears it as often as a can keep it washed. It is from Hannah Andersson. They had several colors so you could do any princess! Right now they are carrying only the long-sleeved version of it.

I wore another Lilly, this time the Marquette shift that was a blue ombre. I am in love with this dress and it was also sold in pink so I had a really hard time choosing if I wanted to match Saige’s Aurora dress or Cinderella. It is no longer in stock at Lilly either, but is still being sold on Zappos.

Adam wore a screen printed Prince Charming suit t-shirt. This was his favorite tee! I ordered it on Etsy from Simply Sublime Baby and was even able to personalize it with a letter “A”!

The third day at Disneyland was Saige’s third birthday so we all dressed up like her favorite character, Donald Duck!! This was my absolute favorite day of costumes. Saige was soooo excited about it and when we met Donald Duck, he took her by the hand for a little parade and everyone in the crowd cheered for her! It was so magical and made for the BEST memory!

Saige wore a blue leotard from June and January that was the perfect shade to match Donald Duck. I added a big red bow that I picked up from Claire’s. My favorite part of the costume was the white feather boa which I sewed onto a pair of white spandex shorts. She looked adorable running around with the little feathers! Her shoes were yellow Saltwater sandals to look like Donald’s yellow feet! These I also purchased on Gilt, but can be found a lot of other places too.

I struggled a lot to find a top for myself in the same shade of blue, but finally found a cute sparkly t-shirt in the girl’s department at Target. I also wore a white tennis skirt from the New Balance for JCrew line and the same red bow from Claire’s in my hair that Saige had on her leotard.

Daddy wore a Donald Duck t-shirt from Target which he was really excited about until we got to Disneyland and it seemed like everyone else was wearing the same one! I wish that I had looked a little harder for something more original, but oh well. Next time!

We spent our last day of vacation at Disney Springs and although we didn’t do a whole family coordination day, you betcha Saige and I were matching! I got her the cutest Lilly Pulitzer inspired outfit from Southern Baby Classics. This shop is the absolute cutest!!! I chose a embroidered Minnie top and matching shorts in Sparkling Sands. And of course I wore a matching Sparkling Sands Essie dress paired with the prettiest Minnie Mouse bracelet from Clutch Your Pearls

I hope ya’ll enjoyed seeing our outfits from Disney. I know we really enjoyed wearing them!! I have linked everything for anyone who is interested! Some of the links are for similar items but most of it is exactly the same! If you have a favorite place to get Disney outfits, drop me a comment below, I would love to hear from you!! 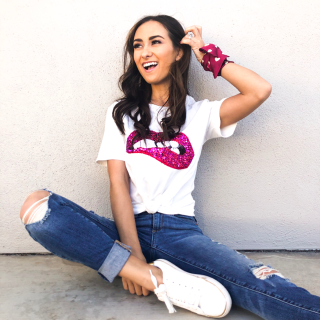 Inspiring women to lead dynamic lives while nurturing their spirit of adventure!